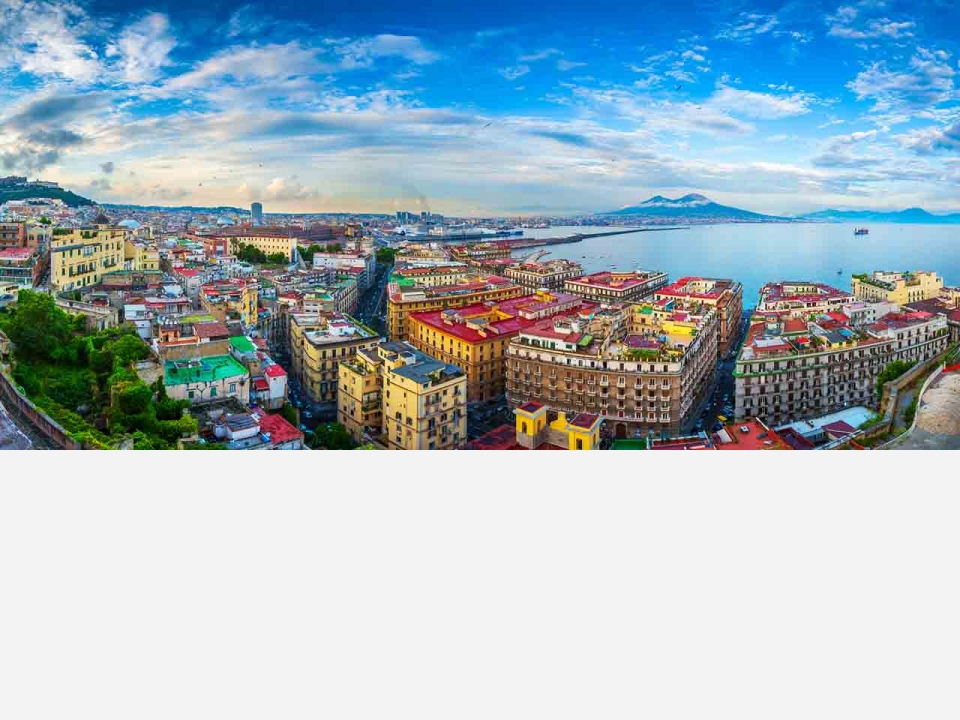 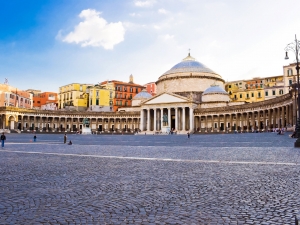 The vast square next to the Palazzo Reale was laid out by order of Murat, whose architect was clearly inspired by the colonnades of St. Peter's in Rome. The large church of San Francesco di Paola in the middle of the colonnades was added as an offering of thanks for the Bourbon restoration by Ferdinand I, whose titles reflect the somewhat garbled history of the Kingdom of Two Sicilies, which was made up of Naples (which included most of the southern Italian mainland) and Sicily. They wew united in the Middle Ages, then separated, then unofficially reunited under Spanish domination during the 16th and 17th centuries. In 1816, with Napoleon out of the way on St. Helena, Ferdinand IV (1751-1825) of Naples, who also happened to be Ferdinand III of Sicily, officially merged the two kingdoms, proclaiming himself Ferdinand I of the Kingdom of Two Sicilies. 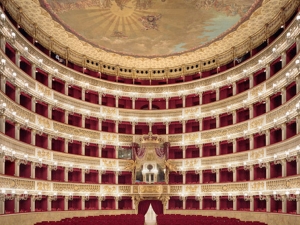 This larger theater was built in 1737, 40 years earlier than Milan' La Scala - though it was destroyed by fire and had to be rebuilt in 1816. You can visit the impressive interior, decorated in the white-and-gilt stucco of the neoclassical era, as part of a prearranged tour. 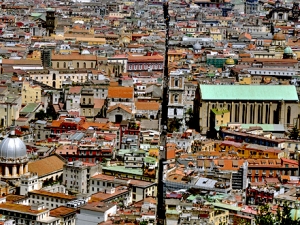 Nowhere embodies the spirit of Naples better than the arrow-straight street informally known as Spaccanapoli (literally, 'split Naples'). Gazing down it, you can sense where the name comes from - the street resembles a trench, running from the central station up to the San Martino hill, retracing one of the main arteries of the ancient Greek, and later Roman, settlements. Along its western section, Spaccanapoli is officially named Via Benedetto Croce, in honor of the illustrious philosopher born here in 1866, in the building at No. 12. As it runs its course, the street name changes to Via San Biagio dei Librai and the Via San Gregorio Armeno. No matter the name, it's a place of vibrant street culture. 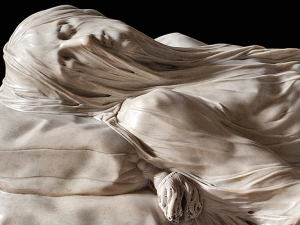 Off Spaccanapoli, the Cappella di Santa Maria della Pietà dei Sangro, better known as the Cappella Sansevero, holds the tombs of the noble Sangro di San Severo family. Muche of it was designed in the 18th century by Giuseppe Sammartino, including the centerpiece, a striking Veiled Christ carved from a single block of alabaster. If you can stomach it, take a peek in the crypt, where some of the anatomical experiments conducted by Prince Raimondo, a scion of the family and noted 18th-century alchemist, are gruesomely displayed. 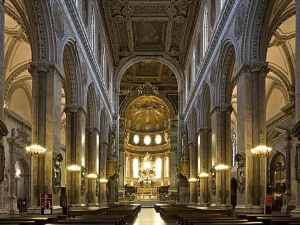 Though the Duomo was established in the 1200s, the building you see was erected a century later and has since undergone radical changes, especially during the baroque period. Inside the cathedral, 110 ancient columns salvaged from pagan buildings are set into the piers that support the 350-year-old wooden ceiling. Off the left aisle you step down into the fourth-century church of Santa Restituta, which was incorporated into the cathedral; though Santa Restituta was redecorated in the late 1600s in the prevalent baroque style, a few very old mosaics remain in the Battistero. The chapel also gives access to an archaeological zone, a series of Paleo-Christian rooms dating from the Roman era.
On the right aisle of the cathedral, in the Cappella di San Gennaro, are multicolor marbles and frescoes honoring St. Januarius, miracle-working patron saint of Naples, whose altar and relics are encased in silver. Three times a year - on September 19 (his feast day); on the Saturday preceding the first Sunday in May, which commemorates the transference of his relics to Naples; and on December 16 - his dried blood, contained in two sealed vials, is believed to liquefy during rites in his honor. On these days large numbers of devout Neapolitans offer up prayers in his memory. The Museo del Tesoro di San Gennaro houses a rich collection of treasures associated with the saint. Paintings by Solimena and Luca Giordano hang alongside statues, busts, candelabras, and tabernacles in gold, silver and marble by Cosimo Fanzago and other 18th-century baroque masters. 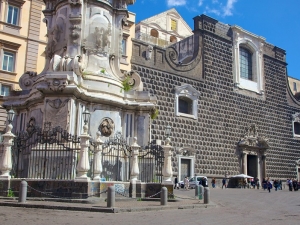 The oddly faceted stone facade of the church was designed as part of a palace dating from between 1584 and 1601, but plans were changed as construction progressed, and it became the front of an elaborately decorated baroque church. Be sure not to miss the votive chapel dedicated to San Ciro (St. Cyrus) in the far left corner of the church. 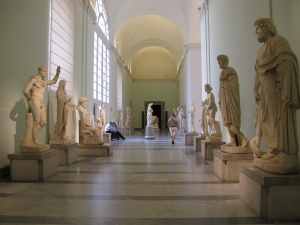 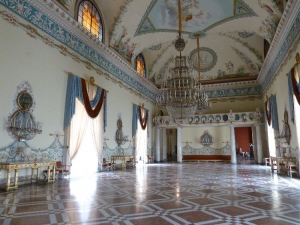 The grandiose 18 th-century neoclassical Bourbon royal palace houses an impressive collection of fine and decorative art. Capodimonte's greatest treasure is the excellent collection of paintings well displayed in the Galleria Nazionale, on the place's first and second floors. Besides the art collection, part of the royal apartments still has a complement of beatiful antique furniture, most of it on the splashy scale so dear to the Bourbons, and a staggering collection of porcelain and majolica from the various royal residences. 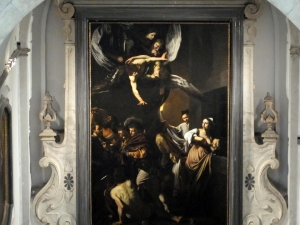 One of the defining landmarks of Spaccanapoli, this octagonal church was built around the corner from the Duomo for a charitable institution founded in 1601 by seven noblemen. The institution's aim was to carry out acts of Christian charity: feeding the hungry, clothing the poor, nursing the sick, sheltering pilgrims, visiting prisoners, ransoming Christian slaves, and burying the indigent dead - acts immortalized in the history of art by the famous altarpiece painted by Caravaggio depicting the Sette Opere della Misericordia (Seven Acts of Mercy). In this haunting work the artist has brought the Virgin, borne atop the shoulders of two angels, down into the streets of Spaccanapoli populated by figures in whose spontaneous and passionate movements the people could see themselves. The original church was considered too small and destroyed in 1655 to make way for a new church, designed by Antonio Picchiatti and built between 1658 and 1678. Pride of place is given to the great Caravaggio above the altar, but there are other important baroque-era paintings on view here; some hang in the church while others are in the adjoining pinacoteca. 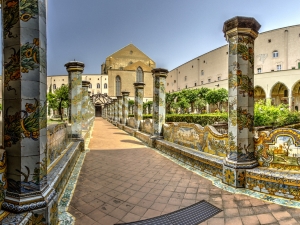 This monastery church is a Neapolitan landmark and the subject of a famous old song. It was built in the 1300s in Provencal Gothic style, and it's best known for the quiet charm of its cloister garden, with columns and benches sheathed in 18th-century ceramic tiles painted with delicate floral motifs and vivid landscapes. An adjoining museum traces the history of the convent; the entrance is off the courtyard at the left of the church.